In 2012, I created a series of gouache on Lokta paper images in response to the continuing conflicts in Iraq and Afghanistan. The hero in these small paintings is a woman shrouded in a burqa. A burqa is a lose garment that covers a woman from head to toe, and is worn by Muslim women, especially in Afghanistan. This piece is entitled Lamentation 10 (The Burning Times).

I had been working for some time with veterans from the War on Terror in an ongoing exploration of the effects of war, when I became interested in the Muslim Other.  I use the term Other as a philosopher would, to describe someone different from the Self.  One thing that I discovered while creating the Lamentations is that the more I learn about an Other, the more I realize they are like my Self.

I often rely on the synchronicities life throws my way to indicate what direction my art practice should take.  About the time I began portraying the woman in the burqa, I heard the a most disturbing account from one of the veterans that had entered my classroom. He sadly recounted an instance when an Iraqui man offered to sell his veiled wife to him in exchange for a goat. I was horrified!

Around the same time, France passed legislation forbidding the wearing of full-face coverings in public. The Islamic scarf controversy (l’affaire du voile) goes back to the late 1980s, and precedes more recent waves of anti-Islamic sentiment, but the 2011 ban was a clear response to the continuing struggles between the West and radicalized Islam.

There were more nudges. The return of a long-lost acquaintance, now married to a Muslim man. Growing numbers of young women wearing scarfs and veils at the college campus where I teach. Some entered my classroom. They were bright, engaged, and perfectly not Other.

I had also just begun reading the book A Theory of Justice by John Rawls,and come across a thought experiment that profoundly moved me.  The thought experiment is called veil of ignorance. This proposition reconciles liberty and equality as it aims to represent the perspectives of all members of society. The idea of the veil overcoming its stigma to become a requisite for true justice resonated deeply and inspired me to look deeper.

In Lamentation 10 (The Burning Times) a woman in a burqa holds a wounded soldier in her arms. He is dressed in desert camo. We can’t see her expression, but the gesture of her hands as she cradles him, how her veiled face touches his unconscious cheek, reveals much emotion.  A fire glows red behind her figure and even the hand-made paper on which the figures are painted seems to be scorched.

My mother was born as bombs fell during the Spanish Civil War. As a girl in Cuba I played in abandoned missile trenches. Like many others kids growing up after the revolution, violence and brutality were common political realities we learned to live with. Those who have never lived through extreme violence cannot comprehend that the burning times are carried in the heart long after peace has flourished. Both models for this painting know the burning times intimately. The woman behind the veil is a bona fide survivor, and the young man is a returning vet.

If only in the reality of this painting, all political paradigms are set aside so that the burning times can include love, compassion, and trust. 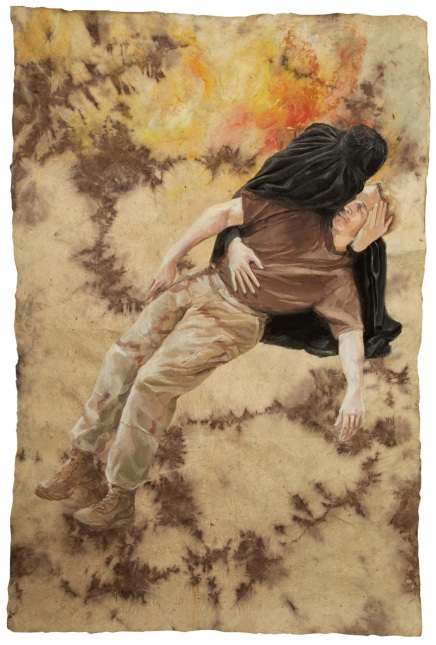 About the Author: Tatiana Garmendia is a Cuban-born artist living and teaching in Seattle. She exhibits widely and is in public collections in the US and abroad. Her work is figurative and driven by existential questions that probe history and culture.

What do you think? Cancel reply